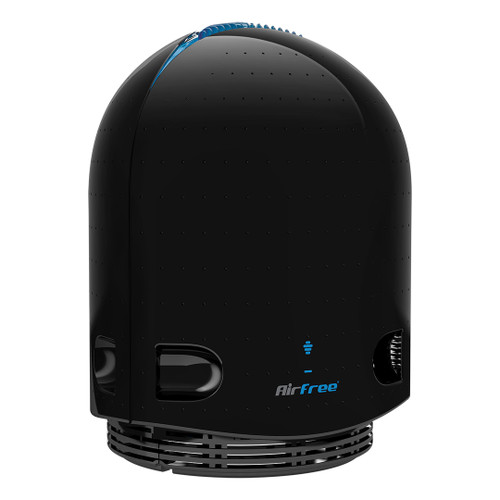 The Airfree P150 is a very compact and effective air purifier, suitable for use in rooms up to 60 m² in size. As a result, it performs best when used in larger spaces such as open-plan kitchen-diners, living rooms and offices.

The Airfree P150 excels at removing a range of pollutants from the surrounding air supply, and its unique design is ideal for destroying allergens and organic materials.

Therefore, it reduces the pollution levels of many common contaminants, including:

To remove such a selection of pollutants, the P150 uses Airfree’s patented and highly effective Thermodynamic Sterilising System (TSS) for ultimate air purification.

Used in place of a standard particle filter, the TSS draws contaminants into a ceramic core where they are incinerated at over 200°C, destroying them. The heated air is then cooled as it passes up through the P150 and is re-circulated into the surrounding environment.

Through the TSS purification method, the P150 can reduce allergen levels by up to 85% in 14 to 21 days, and it will maintain them as long as it remains active in the same space.

By using such a unique filtration system, the P150 can operate without the assistance of a fan. Instead, the TSS creates heat convection currents that gradually drag air into the unit at a manageable pace.

Therefore, it operates at a set speed that remains consistent and ensures optimal performance. However, as a result, the impact offered by the P150 is less immediate when placed in a new environment.

Generally, we feel that the advantages of noise reduction and a lack of replacement filters make that a bearable flaw, though.

By nature, the Airfree P150 needs very little user interaction to be effective. Once plugged in, it will activate automatically, and it should be allowed to operate without any breaks for the best results.

Since it has no fan or filters, the interface goes beyond streamlined, and the entire unit features only one button to control the brightness level of the night light.

Beyond being very straightforward to use, the lack of a fan in the P150 allows it to be silent when active. Therefore, it’s suitable for use at night and won’t cause any disruption to the duration or quality of sleep.

Matching its silent noise levels, the P150 is also power efficient. When active, it only requires a maximum of 58 watts of power, which is crucial as it must remain active 24/7 to be effective.

We also have to give credit to the incredibly compact design of the Airfree P150. With a diameter of only 21.5 cm, it’s no challenge to find a spot to place it, and it has a very understated design to ensure it blends in.

Additionally, the compact design is very light, and it only weighs an astonishing 1.6 kg. As a result, the P150 is the most lightweight air purifier we’ve ever used, and it’s insanely easy to carry between different rooms.

Last but not least, the P150 has been subject to many independent tests across the world. Conducted by a multitude of scientific teams, these tests have examined the effectiveness of the P150 against many common allergens.

Therefore, it is scientifically proven to alleviate symptoms caused by strong allergies to airborne particles such as dust or pollen.

×
!
Compare
You have selected products to compare.
View Products
© 2023 UKAirPurifiers. All Rights Reserved.