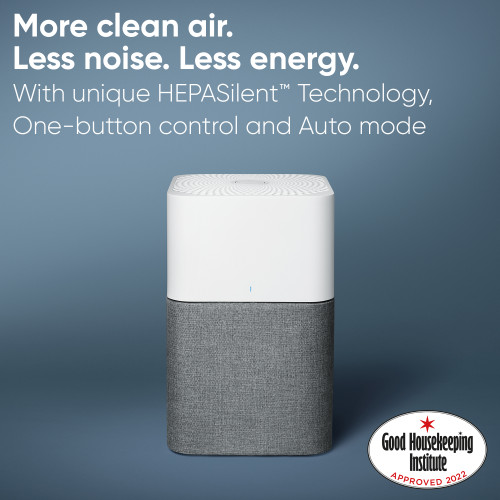 The Blueair Blue 3610 is a powerful air purifier, suitable for use in rooms up to 51 m² in size. As a result, it performs well when used in large spaces such as open-plan kitchen-diners, living rooms and offices.

The Blue 3610 excels at removing a wide range of pollutants from the surrounding air supply, and it can effectively trap particles down to 0.1 microns in size.

Therefore, it reduces the pollution levels of many common contaminants, including:

To remove so many pollutants, the Blue 3610 uses a three-stage method that starts with a pre-filter and ends with Blueair’s unique HEPASilent Combination filter.

Additionally, the HEPASilent technology has been independently tested at RISE (Research Institutes of Sweden) to achieve the HEPA H13 filtration grade according to standard EN-1822.

When used in its AUTO mode, the Blue 3610 can independently alter its fan speed based on the detected air quality. Therefore, during periods of low air quality, it can increase the speed setting to reduce pollutant levels swiftly.

Additionally, the unit converts the air quality information it gathers into one of three levels. An LED indicator then displays the corresponding level by changing its colour to either blue, amber or red.

Rounding out the filtration package offered by the Blue 3610 is the ability to alter the fan speed. There are a total of four settings available, and the highest level, “Boost”, offers the best filtration performance.

When used on the “Boost” setting, the Blue 3610 can produce CADR’s of:

Additionally, in rooms sized 51 m², it can complete five full air changes in an hour. A feat that is aided by its 360° air intake design.

Beyond its exceptional performance, the Blue 3610 is quiet when active, and its HEPASilent filter produces 10% less noise than traditional HEPA filters.

While operating at its lowest fan speed, it only produces 23 dB of noise. That’s equivalent to the sound of rustling leaves, making it suitable for use at night time.

Matching those quiet noise levels, the 3610 is also very power efficient. When active, it only requires a maximum of 38 watts of power. As a result, it’s cheap to run, even for extended periods.

Lastly, the Blueair Blue 3610 is certified by multiple industry bodies, including AHAM (Association of Home Appliance Manufacturers and Energy Star.

Therefore, it is proven to alleviate symptoms caused by strong allergies to airborne particles such as dust or pollen.

×
!
Compare
You have selected products to compare.
View Products
© 2023 UKAirPurifiers. All Rights Reserved.